Do you think you have De Quervain’s Tenosynovitis?

I seem to have had a few patients come in complaining of a wrist pain at the base of their thumbs, especially with grasping and holding items in their hand. The condition causing the wrist pain for these patients is likely to be de Quervain’s Tenosynovitis.

So what are the symptoms, causes and treatment options if you think you have de Quervain’s Tenosynovitis. Take a look at the de Quervain’s disease information below on what more I found out today about this inflammatory condition of the wrist.

Swiss surgeon, Fritz de Quervain, in 1895 published 5 case reports of his patients with wrist pain. The paper was called “On A Form Of Chronic Tendovaginitis”. He found that they had a tender, thickened first dorsal compartment at the wrist. It was from this paper the musculoskeletal wrist condition was subsequently named, De Quervain tenosynovitis.

A funny fact is Dr. de Quervain credits another doctor, Dr. Kocher, with the first description of the wrist pain condition and its first surgical treatment ¹. However, Dr. de Quervain is the famous one.

So what anatomy in your body is causing this wrist pain. The two culprits are the tendons of the abductor pollicis longus (APL) and the extensor pollicis brevis(EPB)muscles. 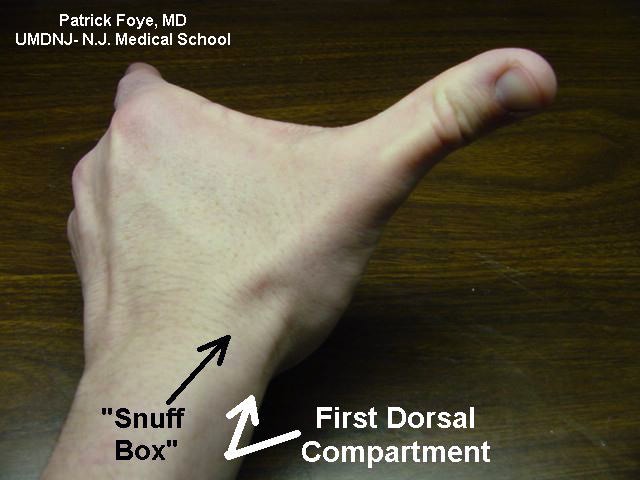 A septum separating the first dorsal compartment into distinct sub-compartments for the abductor pollicis longus tendons and the extensor pollicis brevis tendon is often noted at surgery.

The first thing you are probably wondering is what is a tenosynovitis?

By definition a tendonitis is symptomatic degeneration of the tendon with vascular disruption due to a partial rupture of the fibers. This is not the case with De Quervian’s Tenosynovitis.

Patients may explain it as being very sore to pick things up, excruciating pain trying to lift a coffee cup, cannot pinch fingers together or a deep ache at the base of their thumbs etc…

As mentioned earlier, it is usually unknown why de Quervain’s Tenosynovitis starts. It has been found that mothers of infants aged 6-12 months tend to complain of the wrist pain condition. The pain for these mothers can be in both wrists. This is most likely due to the repetitive lifting of the child, which is getting heavier with age.

Anyone who has had a direct hit or trauma blow to the first dorsal compartment of the wrist may also develop the wrist pain condition.

The main way to test for de Quervain’s is an orthopaedic test called Finkelstein’s Test, which you can see in the video below. Other than that the story you tell the chiropractor or doctor helps. Occasionally an x-ray if an arthritis or fracture is suspected.

So you have consulted an orthopaedic surgeon and they suggested either having a cortisone injection or the de Quervain’s surgery or maybe even using a wrist splint. You might be interested in the following videos below.

The second and third videos go through an actual surgery on the abductor pollicis longus tendons and the extensor pollicis brevis tendon sheath.

The fourth video is by Gary Moller talking about natural ways to try help and treat de Quervain’s tenosynovitis.

Some basic things you could do to help the pain are:

A tendon takes longer to heal than a muscle. So you could expect to wait several weeks to try get the wrist pain to calm down naturally. If you are worried get an opinion from your chiropractor or doctor to see if it is a case of de Quervian’s disease.